We’ve gotten to the point where no one believes you if you say that you’re happy with your body.

I wasn’t around back then, but it seems like a few generations ago, people were sort of settled into the bodies that they had. Of course there have always been ways to ornament or ameliorate the body, but in general, you had the body you had. And that was fine.

And then someone had the bright idea to turn peoples’ insecurity into a profit.

And to keep themselves in business, they had to make sure there was insecurity to profit from! So we heard the culture and advertisements say, in effect:

If you have fat on your body, and you don’t like it, here are some things you can try/buy.

Which, in our economy addicted to growth, became:

You SHOULD hate the fat on your body, and here are some things you can try/buy.

But now, and I believe the shift into this phase has happened during the last ten years (or less), the messages tell us: YOU OBVIOUSLY HATE the fat on your body, and clearly the other things you’ve done aren’t working, so now buy and try this thing/diet/program/gym/class/cookbook…

Let me say one thing here, the requisite disclaimer about health. We’ve recently tipped the scales in the US, so to say, to the point that currently more American adult women are obese than overweight, and men aren’t far behind. Combined, about 75% of adults are overweight or obese.

I’m not saying that we don’t have a problem with our bodies. But I think it’s BECAUSE of our cultural addiction to body hatred, not the cause of it.

We have become so separate from our bodies – it is this thing that gets in the way and is horrifying. It makes weird noises and makes demands like rest and food and play, it doesn’t go along with this hyper-polished/edited version of ourselves we want to believe in. And so we push them away, ignoring them, abusing them, starving them or stuffing them – forgetting that they are our home and our first best friend.

In my yoga classes, I sometimes suggest to people, “Do this move as though you liked having a body and being in a body. As though it felt good to move in a body.”

And our cultural discussion of body image only goes so far – can you be OK with your outsides not matching what other peoples’ outsides look like? And often the conversation is targeted at adolescent girls (as though they were the only ones with “body image issues”) and sounds like, Can you accept that those girls in the magazine are fake and you don’t have to look like them?

What we need is a conversation about body positivity. The radical notion that having a body is an enjoyable, enviable thing. That this is more than a skin sack that you’re stuffed into for your trip through earth school, that this hunk of flesh you have to haul around might actually be more than that.

And some people are leading that conversation – a lot of them are yoga teachers and meditators. (I’m also going to go out on a limb and say there are plenty of yoga teachers that are NOT body positive and just want to use the poses of yoga as the latest trendiest way to punish and abuse their bodies with some idea of fitness…)

It’s a hard conversation to have, because we’ve reached the point where no one believes you if you say that you actually are happy in your body.

When I worked at an eating disorder clinic, we had a little saying:

You are not fat. You have fat. 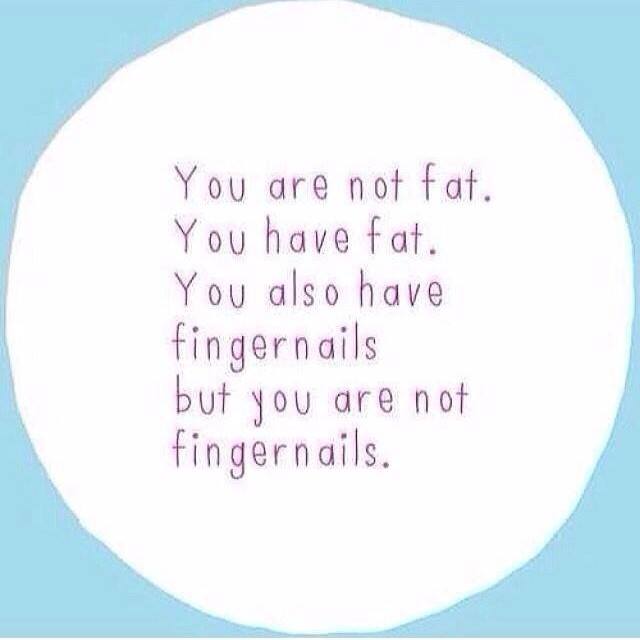 I’ve recently been experimenting with this language change. Because I do have some fat on my body. But that doesn’t mean that I am fat.

And it’s been so liberating to talk about it in this way. And it catches people off guard. I think they’re equally surprised that

A.) I enjoy having a body and that I feel at home in one and

B.) that I can enjoy and feel at home in a body that has some fat on it and

C.) that I can unemotionally and matter-of-factly talk about the realities of my body.

I also have brown hair and painted fingernails and a tall skeleton and a slanted smile and strong legs and piercings in my ear and nose… but for some reason, we don’t get so hung up on those. It’s just the adipose tissue that really trips us up.

What if, just for a week, or a day, or an afternoon, you decided to like your body? You decided to feel at home where you are? What if you decided to decide that having a body and being in a body were delightful? Maybe even start this language shift to ‘I have fat’ vs ‘I am fat’ – it’s major!

Because when we enjoy our bodies and love our bodies, we tend to nourish them and move them better. I think this embracing of the body is not a justification for the weight problems we face nationally, but an antidote.

By speaking truthfully and tenderly about the awesomeness and friendship of our bodies, we can learn to tune out the constant messages of self-hatred, and find, instead, our own best practices for living well.